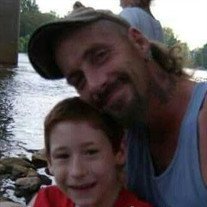 William Albert "Skeeter" Bragg, 41, of Kingwood formerly of Beckley went home to be with the Lord on Sunday, April 9, 2017 at his home.
Born July 13, 1975 at Beckley he was a son of the late Ezekiel Earl "Butch" and Alice Settle Bragg.
Skeeter was a man that never met a stranger so he leaves behind countless friends. Although he didn't have an "official" job title he was able to perform many jobs and never turned his back on anyone that needed help, whether he knew how to do the job or not. He was the proverbial "Jack of all trades master of none". He was usually the life of the party and he had a way of brightening a room just by coming in. Skeeter always left you with a smile.
He had friends that came by his home and often read the Bible together. Skeeter had a desire to know more about God. He also enjoyed fishing, being outdoors, fourwheeling and spending time with family and friends.
Skeeter was preceded in death by a son, Austin Hunter Bragg; paternal grandfather, Earl Howard Bragg; paternal grandmother, Josephine (Jones) Bragg; maternal grandfather, Ed Settle; maternal grandmother, Mary (Mitchell) Settle and one uncle, Johnny Bragg.
Those left to cherish his memory include two sons, Devin Nicholas Bragg of Beckley and Robert Earl Bragg of Hinton; one expected grandson; three sisters, Elizabeth Jones, Debbie Brion and Lisa Barker all of Perry, GA; aunt, Regina Bragg of Kingwood and special friend, Lora Brinegar.
Graveside service and burial will be 1:00 P.M. Monday, April 17, 2017 at the Shockley Hill Cemetery with Grayson Brinegar officiating. Friends are asked to meet at the cemetery from 12:30 P.M. until time of services.
Family and friends will serve as pallbearers.

To send flowers to the family in memory of William Bragg, please visit our flower store.