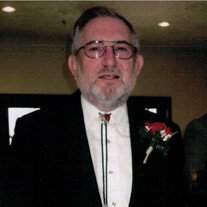 William "Bill" Duane Anderson, 68, of New River Road Hinton went home to be with the Lord Jesus, Friday December 4, 2015 following a short illness.
Born April 11, 1947 at Beckley he was the son of the late Duane Ralph and Emma Jane Ennis Anderson. Bill was an Ordained Minister for the past ten years having been a child of God for the past 53 years. Owner and operator of the Eclectic Corner Christian Book Store in Hinton, a Vietnam Veteran of the United States Army CW3 having proudly served his country with 20 years of active duty service. Former supply manager of numerous heavy equipment parts suppliers. Enjoyed the outdoors, hunting, fishing, boating, camping and spending time with his family, faith family and friends, Bill spent his life helping others and giving his all to their lives after he gave all to his country.
Preceded in death by his great grandson, Titan Elio McDonald.
Those left to cherish his memory is his devoted loving wife and life partner of 49 years, Lorraine "Marie" Cole Anderson of Hinton; two daughters, Tammy Marie Martin and husband David of GA and Karen Renee Hogans and husband Napoleon of NC; nine grandchildren, Jacqueline, Amanda and husband William, Steven and wife Rochelle, Rebecca, Tachi, Napoleon III, William, Tyler and Silas; eight great grandchildren, Gavin, Serenity, Annabell, Tyler, Elizabeth, Lilly, Caitlin and Taylor; two brothers, Benjamin Anderson and wife Diane of Prosperity and Robert Anderson and wife Terry of Columbia, SC; one sister, Barbara Daniels and husband William of Cross Lanes and several nieces and nephews.
Funeral services will be held 1:00 pm Tuesday December 8, 2015 at the Ronald Meadows Funeral Parlors Chapel with Rev. Judy Farley officiating. Burial will follow in the Anderson Cemetery at Maplewood. Friends may call from 11:00 am until time of service on Tuesday at the funeral parlors.
Family and friends will serve as pallbearers.
In lieu of flowers donations may be made to the Outpost of Freedom Ministry at 200 James St. Hinton, WV 25951.

To send flowers to the family in memory of William Anderson, please visit our flower store.