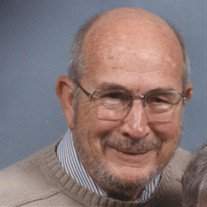 Wallace L. Pritchett, 83, of Verona, VA for the past 34 years, formerly of Princeton, WV passed away peacefully at his home on Friday, August 4th, 2017 following an extended battle with cancer.
Born February 19th, 1934 in Princeton, WV, he was the son of the late James C. Pritchett and the late Mamie Pritchett of Princeton. Wallace was preceded by all of his brothers and sisters: Naomi, James "Jiggs" Jr., Marlene Grush and his beloved big brothers Louie and Bob and younger half-brother Clarence.
Wallace graduated high school early and joined the Army National Guard when he was 16 years old. He served his country over the next decade as a telegraph operator, Sharpshooter, Marksman, Squad Leader, and Tank Commander. After retiring from his civilian employment with the Virginia Railway Company in Princeton, WV, he entered the transportation industry where he specialized in interstate commerce bills and rating management.
Wallace married the late Betty Lilly in 1961, daughter of the late Lunda and Mary Louise Lilly of Nimitz, WV. After moving to Charleston, WV the couple joined the Church of the Nazarene. A promotion entailed a move first to Louisville, KY and later to Verona, VA where Wallace served as Manager of Bills and Rating for Wilson Trucking Company, from which he retired.
Wallace lost his beloved Betty in 2009, and never remarried. He said he had always loved her and always would.
Wallace liked a walk in the woods better than almost anything. But he was also an avid fisherman and enjoyed travel, including to locales such as Florida, where he enjoyed deep sea fishing, Key West, the Bahamas, and Cozumel, Mexico-where he learned to snorkel after his 80th birthday. Hiking, fishing and travel did not take up all of his time-he came back upon request to Wilson Trucking, where he continued to work with the company several years after his retirement. Those who know Wallace often heard him say how much he enjoyed the work and keeping busy. And those who worked with him knew the company was pleased to have the benefit of his years of experience, knowledge of the unique computer system used in the industry, and skill in managing employees.
Left to cherish his memory are his son, Scott Pritchett, of Hollywood, Florida, Scott's wife Katherine, Wallace's daughter Sally Medeiros and her husband Geoffrey of Verona, his two grandsons Cameron and Bryce Pritchett and granddaughter Elaine Medeiros, his sister-in-law Phyllis Comer and niece Sandy Comer of Hinton, WV, his sister-in-law Carol Pritchett and a host of other living nieces and nephews on both the east and west coast of the United States.
Relatives and friends are invited to spend a last evening with Wallace on Thursday, August 10th from 6pm to 8pm, and at funeral services beginning at 11AM Friday, August 11th at Ronald Meadows Funeral Parlors in Hinton, WV, with Pastor Bill Ballengee officiating. Wallace's burial service will include Military Funeral Honors at the Lilly-Crews Cemetery in Nimitz, WV.

To send flowers to the family in memory of Wallace Pritchett, please visit our flower store.