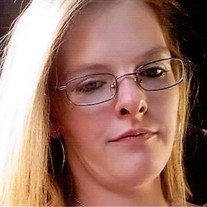 Susan "Suzie" Kay Daniel, 23, of Lerona, went home to be with our Heavenly Father Thursday, April 28, 2016.
Born December 20, 1992 at High Point, NC she was a daughter of Cindy Ryan Gill and James William Gill of Forest Hill and the late Kennith Ray Barker Sr.
Suzie attended Summers County High School and was a cashier for Little General. She was a loving mother, wife, daughter and best friend who enjoyed hunting, fishing, the outdoors, gardening and taking care of her family. Although her life was taken so soon she brought many loving memories to everyone who knew her.
Suzie was preceded in death by her beloved son, Isaac William Daniel; maternal grandparents, Bill and Dorothy Ryan; paternal grandparents, Russell Pittman and Anna Louise Downing and paternal step grandparents, Billy and Goldie Martin.
Those left to cherish her memory include her one and only true love and husband Jackie Dale Daniel Sr. at home; loving son, Jackie Dale Daniel Jr.; mother in law, "Momma" Angela Daniel; father in law, Junior Boone; two brothers, Kenny Ray Barker Jr. and B.J. Barker; niece, Shannon Barker; grandparents in law, Jackie and Linda Buchanan; aunt and uncle, Robert and Beth Smock and several aunts, uncles and cousins whom she loved dearly.
Funeral services will be Friday 11:00 A.M. at Ronald Meadows Funeral Parlors Chapel with Pastor Ron Iddings officiating. Burial will follow in the Daniel Family Cemetery. Friends may call from 6:00 - 8:00 P.M. on Thursday at the funeral parlors.
Family and friends will serve as pallbearers

To send flowers to the family in memory of Susan Daniel, please visit our flower store.