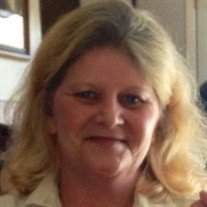 Sharon Ann "Sherry Baby" Ward, 54, of Hix went home to be with the Lord, Thursday, December 14, 2017 at her home following a sudden illness.
Born February 27, 1963 at Clifton Forge, VA she was a daughter of the late Billy Keith and Glenna Ruth Ward Wright.
Sharon was a member of the Chestnut Grove Baptist Church where she formerly served as custodian. She was a secretary for Hix Mountain Construction and a laborer for Holley Bro. and Jim's Construction companies. Sharon enjoyed being a homemaker and her greatest love was taking care of her daughter and grandchildren. She was a loving mother, grandmother, sister and friend.
Sharon was preceded in death by her husband, Oliver Ward; one son, Ivan Wayne Gill Jr. and two brothers, Randy Wright and Kevin Wright.
Those left to cherish her memory include one daughter, Jennifer Thompson and husband Jeff of Rainelle; grandchildren, the love of her life, Mia Thompson, Makena Thompson, Kevin Thompson, Tom Thompson, Zach Thompson, Dakota Bourne and Shylea Havens; three sisters, Carolyn Foster of Jumping Branch, Debbie Woods and husband Darrell of Ghent and Marsha Wright of Siloam, NC; two brothers, Ronnie Wright of Madams Creek and Billy Ray Wright of Charleston; brothers and sisters in law, Dino and Kim Ward, Clyde Edward Ward and Harvey and Sissy Ward and numerous special nieces, nephews and cousins whom she loved dearly.
Funeral services will be 12:00 P.M. Friday, December 22, 2017 at the Ronald Meadows Funeral Parlors Chapel with Pastor Herb Cook officiating. Burial will follow in the Cecil Ward Cemetery at Hix. Friends may call from 10:00 A.M. until time of services on Friday at the funeral parlors.
Family and friends will serve as pallbearers.

To send flowers to the family in memory of Sharon Ward, please visit our flower store.