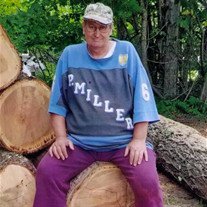 Samuel Hollis "Sammy" Farley, 66, of Ellison Ridge Road, Flat Top went home to be with the Lord Friday April 20, 2018 following a short battle with cancer.
Born February 10, 1952 he was the eldest child of the late Hollis E. and Velma Reed Farley.
Samuel lived most of his life on Ellison Ridge Road near Flat Top in Summers County. He was a timberman and former employee of Means Lumber Company in Beckley. Samuel enjoyed working timber with his band mill and spending time with his wife at their camp. Samuel was a brother, son, uncle and the best husband God could give a family.
Those left to cherish his memory include his wife of 40 years Joyce L. "Jessie" Farley; nephew, Jr. Farley; niece, Kathy Jo Rose; two brothers, William T. Farley and wife Jerri of Advance, NC and Randall L. Farley and wife Leta of Union; one sister, Rita Jean Berry and husband Roger of Live Oaks, FL and several nieces, nephews and cousins whom he loved dearly.
Funeral services will be 1:00 P.M. Monday April 23, 2018 at Ronald Meadows Funeral Parlors Chapel with Pastor Robbie Merritt officiating. Burial will follow in the Samuel Cemetery at Ellison Ridge. Friends may call from 11:00 A.M. until time of services Monday at the funeral parlors. His nephews and niece will serve as pallbearers.

To send flowers to the family in memory of Samuel Farley, please visit our flower store.