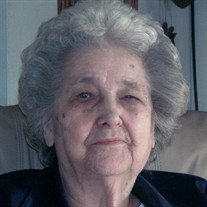 Sadie Eileen Angell, 97, of Morehead, Kentucky, formerly of Hinton, West Virginia, passed away peacefully on Saturday, December 30, 2017, at the Ridgeway Rehabilitation and Nursing Home in Owingsville, Kentucky.
She was born at Madams Creek on March 12, 1920, to the late John A. and Marinda Fink Yancey. In addition to her parents, she was preceded in death by her husband of nearly 62 years, Woodrow W. Angell; one son, Leon W. Angell; two great-grandsons; and twelve siblings.
She is survived by two sons, Jennings Angell and wife Polly of Casselberry, Florida, and Wayne Angell and wife Lola of Covington, Virginia; one daughter, Carol Nutter and husband David of Morehead, Kentucky; one daughter-in-law, Wanna Angell of Bothell, Washington; eight grandchildren, Connie Carden (Eugene), Birdie Sharp, Brian Angell (Jaime), Jeffrey Angell (Cynthia), Stephanie Myers (John), Christi Huffman (Craig), Jon Nutter (Kimber) and Matthew Nutter (April). She also leaves fifteen great-grandchildren and twenty-three great-great-grandchildren.
Eileen was a loving wife, mother, grandmother, sister, aunt, and friend. She was a homemaker and a great cook, well-known for her biscuits, yeast rolls, and coconut cream pies. She worked as a cook at Jack's Restaurant and Bluestone State Park. In later years, she helped her husband run a produce market on Temple Street in Hinton. She had an active mind and loved to read and watch Jeopardy. She also loved jigsaw puzzles, crossword puzzles, Scrabble, and other word games.
She was a long-time member of Mt. Olivet Church on Madams Creek where she played the piano, taught Sunday School and served in other capacities. She attended Johnson First Church of God after moving to Kentucky to live with her daughter. Eileen always exhibited the love of Christ and inspired others with her strength and grace. She will be remembered for her kind, sweet spirit. She was deeply loved and will be greatly missed.
Funeral services will be held Wednesday, January 3, 2018, at 1:00 P.M. at Ronald Meadows Funeral Parlor Chapel with ministers Daniel Harris and Sonny Angell officiating. Friends may call at the funeral parlor on Wednesday from 11:00 A.M. until time of service. Burial will follow in the Restwood Memorial Gardens.
Serving as pallbearers will be Jeffrey Angell, Robert Angell, Edward Cole, Mark Meador, Matthew Nutter, and Jerry Scruggs. Honorary Pallbearers will be Craig Huffman, Bruce Jameson, and John Myers.

To send flowers to the family in memory of Sadie Angell, please visit our flower store.