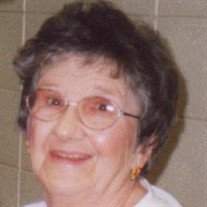 Ruth Virginia McGuire, 95, of Hinton went home to be with the Lord at 4:45 A.M., Saturday, July 04, 2015 following a short illness.
Born November 22, 1919 at Alderson, she was the daughter of the late James J. and Nellie West Humphreys.
Ruth moved to Hinton from the Beckley area in 1950. She is a member of the First Baptist Church of Hinton and retired as an employee of Summers County Appalachian Regional Hospital in 1987. Ruth enjoyed sewing, working in her flowers, and listening to country music.
She is preceded in death by one son, Robert Wayne Vest in 1955; one brother James H. Humphreys and two sisters; Jewel Allen and Juanita Vest.
She is survived by her son Earl D. Vest of Hinton; two daughters, Phyllis Williams of Norfolk, Va. and Drema Carson of Madison, AL; one sister, Jean Williams of Hilldale; two grandsons, Gary D. Williams and wife Rhonda of Norfolk and Richard C. Williams of Norfolk; two granddaughters, Donna Ruth Carson of Chattanooga, Tn. and Cynthia L. Carson of Madison; two great granddaughters Courtney Carson of Madison and Lauren Williams of Norfolk; several nieces and nephews and many longtime friends also survive.
The family wishes to thank the staff and caregivers of Main Street Care, Dr. Chhabra's office, Summers County ARH, and Jack David Woodrum for their wonderful care of our mother, grandmother, great grandmother, and sister throughout her illness.
Funeral services will be held 2:00 P.M. Tuesday, July 7, 2015 at Ronald Meadows Funeral Parlor of Hinton with Pastors Robbie Merritt and Jeff Canterbury officiating. Burial will follow at the Fletcher Addition in Alderson, WV. Friends may call from 6:00 - 8:00 P.M. on Monday at the Ronald Meadows Funeral Parlors in Hinton.
Friends and family will serve as pallbearers.

To send flowers to the family in memory of Ruth McGuire, please visit our flower store.