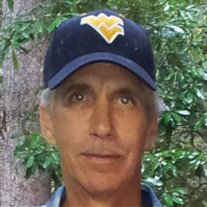 Ricky Lee Slatton, 56, of Lindside, West Virginia, passed away at his home on the morning of July 14, 2018. He was born on November 28, 1961, in Pineville, West Virginia, to Clarence Slatton and Carol Bragg Slatton. He lived most of his life in Summers and Monroe Counties. He was preceded in death by his parents and his wife of 16 years, Teresa Rae Whittle Slatton. Those left to cherish his memory are as follows: Son, Jessy Lee Slatton, and wife, Alisha, who provided two granddaughters, Hailey Rose Slatton and Hannah Rae Slatton; of Fort Benning, Georgia. Son, Ricky Ray Slatton, who provided a grandson, Nathan Slatton; of Princeton, WV. Brother, Tim Slatton and wife, Ann, of Forest Hill, West Virginia. Sister, Clara Slatton/Mitchell, and fiancée, David Russ of Hilldale, West Virginia. Four nephews, one niece; and his dearest friend, Kathy Baker.
He was a U.S. Army Veteran; a skilled heavy equipment operator and mechanic who enjoyed working on cars, attending family reunions, and drinking cold beer. Ricky was stubborn but loving. Most notable, he was a man of many trades. His personality would put smiles on everyone around him, smiles that will last a lifetime.
Funeral services will be held 7:00 pm Thursday July 19, 2018 at the Ronald Meadows Funeral Parlors Chapel with Pastor Paul Broyles officiating. Friends may call from 5:00 pm until time of the service at the funeral parlors. Cremation will follow the service.

To send flowers to the family in memory of Ricky Slatton, please visit our flower store.