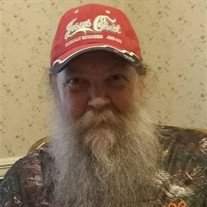 Orrie Joseph "Country Joe" Taylor, 67, of Hinton passed away Monday, December 3, 2018 at Beckley Appalachian Regional Hospital from cardiac arrest and a broken heart.
Born June 5, 1951 in Salem, Ohio he was the son of Norma June (Byers) Taylor of Salem, Ohio and the late Ora Joseph Taylor.
Joe attended school in Mineral Ridge, Ohio until 1968 when he transferred to Salem High School, attending through 1971. He worked at Royal China Company in Sebring and spent several years on the City of Salem Street Department Crew. He loved the Lord and spent time reading his bible, praising God and listening to music. Joe enjoyed spending time with his wife and family and friends, camping, fishing and cheering on his favorite Ohio sports teams; the Cleveland Browns, Ohio State Buckeyes and Cleveland Indians (It's Tribe Time Now!)
Besides his father, he was preceded in death by his precious wife, Terri Lee, who predeceased him by one year and a few hours.
Besides his mother, those left to cherish his memory include three sons, Derek and Shawn both of Carroll County, Ohio and Andrew Michael of Florida; one daughter, Hannah Rebecca of Salem, Ohio; brothers, Timothy Lee, Mark Edward and Paul Jonathan all of Salem, Ohio; one sister, Lynda Sue of Washingtonville, Ohio; stepchildren, Sean (Tracey) Spanbauer of Colorado, Joshua (Ginny) Henderson of Pipestem and Angela (Charles) Romanello of Hinton; step grandchildren, Cody, Carley, Kaylie, Matthew, Joshua, Lillian, Vivian and Noah; several nephews and a niece who all loved him very much.
A Memorial Service will be held at Cooks Chapel Thursday, December 6, 2018 at 1:00 P.M. with Pastor Dallas Peyton officiating.

To send flowers to the family in memory of Orrie Taylor, please visit our flower store.