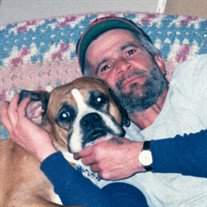 Michael Paul Stokes, 62, of Talcott went home to be with the Lord, Wednesday, August 1, 2018 at Bowers Hospice House following a long illness.
Born July 14, 1956 at Baltimore, MD he was a son of Delma Ciesielski of Talcott and the late Paul J. Stokes.
Michael was a member of Pence Springs Community Church. He was a longshoreman for Merseline Corp. and a former coal mine operator. Michael loved hunting, fishing, deer hunting with his brother Bob and spending time with family and friends.
He was preceded in death by his step father, John Ciesielski; one sister, Miesha Robbins and special friend, Elaine Berkley.
Besides his mother he is survived by one son, Travis Scott Stokes and fiancé of Baltimore, MD; two brothers, Robert Michael Pakacki and companion Doris Wheeler of Hilldale and John Ciesielski and wife Gayle of Hilldale; four sisters, Sandra Chips and husband Butch of Baltimore, MD, Deborah Fermanac and husband Glen of Baltimore, MD, Diane Calendine of Pence Springs and Denice Pakacki of Talcott and a host of nieces, nephews and cousins.
Funeral services will be 2:00 P.M. Sunday, August 5, 2018 at Ronald Meadows Funeral Parlors Chapel with Pastor Roger Persinger officiating. Burial will follow in the Barger Springs Cemetery. Friends may call from 6:00 - 8:00 P.M. Saturday at the funeral parlors.
Nephews will serve as pallbearers.

To send flowers to the family in memory of Michael Stokes, please visit our flower store.