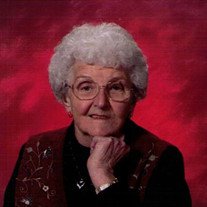 Mary Annabelle Bennett, 95, of Mt. Nebo formerly of Talcott entered into eternal rest Saturday May 21, 2016 following a short illness.
Born February 16, 1921 at Jumping Branch she was the daughter of the late Fred and Minerva Via Cochran. She was a Godly woman who read her bible faithfully which helped her to live a devoted Christian life, a member of the Primitive Baptist Church she also attended the Gilgal United Methodist Church at Mt. Nebo. She enjoyed crocheting, sewing, quilting and was a loving mother, grandmother, great grandmother and great-great grandmother.
Preceded in death by her husband, Delmar Earl Bennett in 2002; son, Larry Cline in 1946 at two brothers, Basil and Lacy Cochran.
Those left to cherish her memory include two sons, Randy Bennett and wife Della of Mt. Nebo and Gary Bennett and wife Brenda of Camden on Gauley; eight grandchildren, Dwayne and Timmy Bennett, Angela Castle, Amber Hare, Jennifer Phillips, Cindy Painter, Douglas Bennett and Belinda Stear; two step grandchildren, Erica Butler and Erin Wyatt, sixteen great grandchildren, five great-great grandchildren, one brother, Jack Cochran of Webster Springs and two sisters, Pearl Campbell of Logan, OH and Betty Wills of Talcott.
Funeral services will be held 12:00 pm Tuesday May 24, 2016 at the Ronald Meadows Funeral Parlors Chapel with Elder Tommy Pack officiating. Burial will follow in the Anderson-Vest Cemetery at Streeter. Friends may call from 11:00 am until service time on Tuesday at the funeral parlors.
Garrett and Grace Stear, Douglas Bennett, Donald Phillips, Tim Painter, Ken Stear, Charles Cochran and Jackie Cochran will serve as pallbearers.
The family would like to thank the Nicholas Co. Nursing and Rehab Center for their love and excellent care given to their mom.
In lieu of flowers donations of sympathy may be made to one's own charity.

To send flowers to the family in memory of Mary Bennett, please visit our flower store.