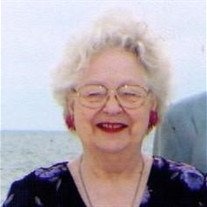 Margaret Irene (Chick) Glass Martin, of Talcott, WV passed away peacefully on September 30, 2016 at the Summers County Nursing & Rehabilitation Center.
Chick was born on November 17, 1926 in Talcott and grew up there. She graduated from Talcott High School in 1944. She married the love of her life, Jim Martin in June 1946. They were married for 67 years. She always said that he was the best looking sailor in the Navy. Chick was a loving daughter, wife, mother, grandmother, and friend and a member of the Rollynsburg Baptist Church at Talcott.

She is survived by her daughter in law, Beckie Stennett Martin, grandson Chris Martin and his wife, Tracey Bleeker, grandson Kevin Martin and his wife, Tiffany Stull, and one great-grandson, Alec Bleeker. She also leaves her four legged companions, Snuggles & Frisky. Her 3 nieces, Debbie Sue Bailey, Alicia Huff, and Margaret Peterson, and their families.

Services will be held at the Ronald Meadows Funeral Parlor on Wednesday, October 5, 2016 at 2:00 P.M. with Pastor Dana Stalnaker officiating. Burial will follow in the Talcott Cemetery. Friends may call from 1:00 pm until time of services on Wednesday at the funeral parlors. Members of the church will serve as pallbearers.

A very special and heartfelt thank you to Rena Thompson who for several years took care of Chick while she lived at home and continued to check on her several times a week after she went into the nursing home. We wish to thank all the staff at the Summers Nursing & Rehabilitation for taking such good care of her while she was residing there.

To send flowers to the family in memory of Margaret Martin, please visit our flower store.