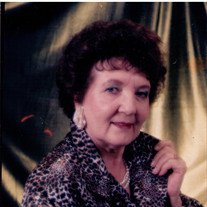 Lyla Irene Sizemore, 91, of Nimitz went home to be with the Lord Wednesday, October 19, 2016 at her home following a long illness.
Born March 23, 1925 at Streeter she was a daughter of the late Sylva and Eliza Harvey Pack Kochy.
Lyla was a member of the Freewill Baptist Church at Bim, WV and attended Grace Baptist at Nimitz. She had worked as a supervisor at Lester Industries and as a certified tig welder during World War II, welding ships for the US Navy. Lyla enjoyed singing, her elders, loved children and spending time with her family and friends.
She was preceded in death by her husband, Benjamin Franklin Sizemore and one brother, Danny Pack.
Those left to cherish her memory include, Jerry Sizemore and wife Barb of Windham, OH, Virgil Carl Sizemore and wife Deanna of Garrettesville, OH and Benjamin J. Sizemore and wife Margaret of Oakwood Village, OH; one daughter, Donna Kay Harris Short and husband Henry of Streeter; twenty one grandchildren; eighty five great grandchildren; many great great grandchildren and three sisters, Nina Lloyd of CA, Alene Farley of CA and Betty Barnish of Twinsburg, OH.
Funeral services will be 11:00 A.M. Saturday, October 22, 2016 at Ronald Meadows Funeral Parlors Chapel with Elder Tommy Pack officiating. Burial will follow in the Vest Family Cemetery at Streeter. Friends may call from 6:00-8:00 P.M. Friday at the funeral parlors.
Family and friends will serve as pallbearers.

To send flowers to the family in memory of Lyla Sizemore, please visit our flower store.