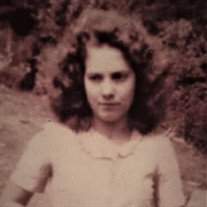 Lucy Mae Lilly Lucas, 84, of Ellison passed away Friday morning, March 10, 2017 at her home following a long illness.
Born June 14, 1932 at Suck Creek , Summers Co. she was a daughter of the late Charles W. and Margaret Janie Lilly Lilly.
Lucy was of the Baptist Faith and a homemaker.
She is preceded in death by her husband, George Robert "Dink" Lucas; and two sons, Clarence Bobby Lucas and Charles "Chuck" Lucas.
Those left to cherish her memory include her children; Margaret Ellen Stowers and companion Ronald Ward of Chestnut Mt., Peggy Shrewsbury and companion Roger Ferguson of Jonben, Diana Cox and husband Randy of Camp Creek, Jerrie Farley and husband Tommy of Advance, NC, and Leta Farley and husband Randall of White Sulphur Springs; several grand, great and great great grandchildren also survive.
Funeral services will be 1:00 PM Monday, March 13, 2017 at the Ronald Meadows Funeral Parlors Chapel with Eddie Wills officiating. Burial will follow in the Lucas Family Cemetery at Ellison. Friends may call from 11:00 AM Monday at the funeral parlors until time of services. Grandchildren will serve as pallbearers.

To send flowers to the family in memory of Lucy Lucas, please visit our flower store.