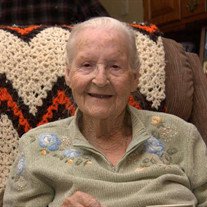 Born in the mining town of Lerona, West Virginia: the place is gone now- and sadly- so is she.
Lucille Bernice Jones "Lucy, Mom, Gramma, Noni" has now gone to rest in God's arms. Lucille was 101 when she went to be with the Lord Jesus on Saturday, August 27, 2016. She died of natural causes in her home in Hinton surrounded by loved ones.
Lucille was born on November 4th, 1914. She was the daughter of William Lloyd Britton and Myrtle Plum Britton of Webster Springs, West Virginia. She was married for 65 years to Doy Martin Jones who preceded her in death in 1997.
Lucille Britton Jones was a member of First Baptist Church of Hinton and of the Eastern Star. She had an associate's degree in home decorating from Finn College, in Cleveland, Ohio. She and Doy were owners and operators of Jones and Jones Inc., distributors of Fashion Two Twenty cosmetics and various other business throughout West Virginia and adjoining states. She and her husband came to Hinton, West Virginia in 1966 to fish the New River. They loved the area so much that they built a home on the New and retired here in 1978.
Besides her beloved husband, she was preceded in death by her brothers and sisters Lester Britton, Mabel Britton Dean, Ross Britton, Julia Britton Cool, Dennis Britton, Ted Britton, Helen Britton Burns, and first cousins Ray and Annabelle.
She was preceded in death by four of five children: Jackie Jones; James Lloyd Jones and his wife Helen Jones; Deloras Wavalene Dzik and her husband Arthur Dzik; and Edwin Doyle Jones. In addition, she was preceded in death by several grandchildren: Robin Dzik Burgess; Rocket Sonar Jones; and Alan Dean Jones.
Those left to cherish her memory include her youngest child, Aloma "Lorrie" Jones Arp of Hinton, dearest niece Juanita Green Null and great-nephew Mike Null and his family. Her grandchildren include the following: Deborah Sharpe of Hinton; Douglas Jones; Tohoma Rhodenia Jones; Sue Jones (wife of Rocket Jones); Charles Martin Polen; Edwin "Skip" Doyle Jones and wife Marty Jones, Curtis William Jones and wife Rhonda Elaine Jones of Hinton; Jaye-Andrea Arp of Meadow Bridge, Joelle Re Arp-Dunham and husband Richard Ernest Dunham, III; Jennifer Arp Bazzie and husband Brian Keith Bazzie of Cool Ridge. She also was survived by 21 great grandchildren and numerous great-great grandchildren.
Funeral services will be held 11:30 am Tuesday, August 30, 2016 at the Ronald Meadows Funeral Parlors Chapel with Pastor Chris Price officiating. Burial will follow in Restwood Memorial Gardens near Hinton. A family viewing will take place from 10:30 to 11:00 a.m. Public viewing will be at 11:00 a.m. until service time. Pallbearers will be the following great grandchildren: Curtis "William" Jones, Shawn Jones, Benjamin Jacoby, Richard Dunham, IV, Trey Jones, and Scott Jones.
Our family with all of our and Lucille's wishes would like to thank Hospice of Southern West Virginia, especially Kathy, Stacy, Connie and Lori for their kindnesses and loving care throughout the past months
The family will also receive family and friends at 2:00 pm Tuesday at the Bellepoint Baptist Church where a dinner will be for the family and friends.

To send flowers to the family in memory of Lucille Jones, please visit our flower store.