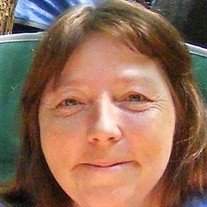 Loretta Mae Williams, 53, of Hinton formerly of Beckley passed away January 28, 2017 at Bowers Hospice House following a short battle with cancer.
Born June 29, 1963 in Beckley she was the daughter of the late Wiley Raymond and Maggie Belle Taylor. Miss Loretta was a former employee of Kroger in Hinton. She enjoyed the simple things in life such as sitting by the river, fishing and camping. She will truly be missed by friends and family.
Preceded in death by two sisters, Catherine Wyrick and Pauline Mills and four brothers, Jerry Taylor, Ray Taylor, Danny Taylor and Gary Mills.
Loretta is survived by a son, Jason Taylor and wife Tiffany of Beckley; daughter, Amanda Williams of Beckley; five brothers, Lee Taylor of Beckley, David Taylor and wife Angela, Del Taylor, Stephen Taylor and wife Dawn all of Asheboro, NC and Donnie Mills of Beckley; one sister, Debbie Carson of Beckley and numerous nieces and nephews. Also left to cherish her memory would be her soul mate and best friend, Dean Bolen and their fur baby Sheba.
At Loretta's request there will be no services.
To send flowers to the family in memory of Loretta Willliams, please visit our flower store.