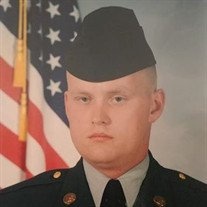 Keith Douglas Yancey, 45, of Beaver entered into eternal rest Saturday, December 30, 2017 at Summers County Appalachian Regional Hospital following a sudden illness.
Born May 28, 1972 in Summers County he was a son of the late Billy Franklin Yancey and Victory Cook Yancey.
Keith was an over the road truck driver and operator who enjoyed hunting, fishing, NASCAR and country music. He loved his country and served in the United States Army but his biggest love was his children.
Other than his parents, he was preceded in death by a brother, Richard Wayne Yancey.
He is survived by four children, Nikki Gill of Hinton, Sherry (Tory) Miller and fiancé Hogan Marshall, Noah Yancey and Chelsea Yancey, all of Middletown, OH; one granddaughter, Malory of Hinton; a special little boy, Lucian and his mother, Bessie Turner of Norwood, OH; four brothers, Jerry Yancey, Benny Yancey and wife Mary and Danny Yancey, all of Lynchburg, VA and Mike Yancey of Beckley; three sisters, Billie Meador and husband Bobby of Beaver, Cindy Jennings Tilton and husband Brian of Madison Heights, VA and Vickie Yancey Kuhn and husband Jan of Shady Spring; several nieces, nephews, cousins, aunts and uncles.
Funeral services will be 1:00 P.M. Friday, January 5, 2018 at Ronald Meadows Funeral Parlors Chapel with Pastor Rodney Allen officiating. Visitation will be from 11:00 A.M. until time of services at the funeral parlors. A private burial will be held at a later date.
We always want to think that everyone decent goes somewhere wonderful.

To send flowers to the family in memory of Keith Yancey, please visit our flower store.