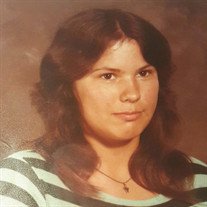 Joyce Marie Snow, 52, of Newport News, VA formerly of Hinton went to be with the Lord Thursday, July 28, 2016 at her home surrounded by her family and friends.
Born July 31, 1963 at Hinton she was the daughter of Hallie Mae Adkins of Hinton and the late Clifford George Adkins. A homemaker, the light of her life was spending time with her grandchildren and family.
Besides her father she was preceded in death by two brothers, Joey and Larry Adkins and one sister, Rosie Adkins.
Besides her mother those left to cherish her memory include her husband of 35 years, Ernest Lee Snow Sr. of Newport News, VA; one son, Ernest Lee Snow Jr. of Newport News, VA; one daughter, Stacy Marie Kelly and husband Joseph of Spotsylvania, VA; eight grandchildren, Nathaniel, Kyndra, Kayla, Jackson, Hunter, Faith, Mackenzie and Joey; five brothers, Roger Adkins of Hinton, George Adkins and wife Audrey of Pipestem, Russell Adkins of Hinton, Billy Adkins and companion Drema of Hinton and Ronnie Adkins and companion Kay of Princeton; three sisters, Betty Burgess of Princeton, Connie Adkins and companion Kevin of Bunker Hill and Bonnie Ward of Hinton and several nieces, nephews, cousins and friends who will all dearly miss her smile and personality that could light up the darkest room.
Funeral services will be held 11:00 am Friday, August 5, 2016 at the Ronald Meadows Funeral Parlors Chapel with Pastor Ron Iddings officiating. Burial will follow in the Hilltop section of the Esquire Cemetery. Friends may call from 6-9 pm Thursday, August 4, 2016 at the Ronald Meadows Funeral Parlors.
Family and friends will serve as pallbearers.

To send flowers to the family in memory of Joyce Snow, please visit our flower store.