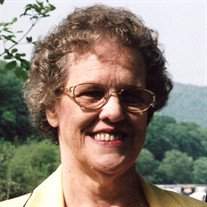 Joyce Clorene Harvey Miller was born at Cave Ridge in Summers County on Feb. 23, 1935 and passed away at her residence on September 11, 2016. She was the daughter of the late Oris Lee and Bessie (Hogan) Harvey. Her mother died a few days after her birth, and her paternal grandparents, John Pearly and Ida (Lilly) Harvey took her to raise. She resided with her Grandmother Ida until November 26, 1958, when she married James Lacy Miller.
James "Jimmy" preceded her in death on October 13, 2008. She was also preceded in death by her brother Alva L. Harvey and half-sister Lora Mae Williams and step-mother Piney Harvey.
Mrs. Miller was an excellent gardener. She canned and preserved much of the produce they raised. She assisted her late husband with numerous woodworking projects. She was an outstanding cook. She loved preparing large family meals and having her family around her.
She was a member of Calvary Baptist Church at Red Sulphur Springs, and had resided at Forest Hill for 51 years.
She is survived by three children: Medeta Miller Watts, Lacy Lynn (Margaret) Miller, and Tommy A. Harvey. She is also survived by six grandchildren and one great grandchild: Nathaniel (Wendi) Watts, Andrew (Kaitlin) Watts, Ida Beth Miller, Samuel Miller, Sarah Harvey, Daniel Harvey, and Lundon Kinsolving.
She is also survived by one brother, Edward (Althea) Harvey) and one sister-in-law, Mary Harvey, and numerous special cousins.
The family would like to extend a special thanks to Dr. James Blume and staff at Forest Hill Family Practice, to Davita Dialysis at Fairlea, and to her caregivers Chrystal Ward and Marlene Cook. Her children also want to send a special thanks out to her precious grandchildren, cousins, and neighbors who assisted in her care and were faithful to call or visit.
Funeral services will be held 11:00 A.M. Thursday, September 15, 2016 with Pastor Derrick Leslie and Pastor Eddie Harris officiating. Burial will follow in the Lilly-Crews Cemetery at Nimitz. Friends may call from 6:00 - 8:00 P.M. on Wednesday at the funeral parlors.
Those serving as pallbearers will be: Sons and Grandsons, along with Gary Meadows, Rudy Allen, Bob Cales, and Robert McDonald. Honorary Pall Bearers will be her brother Edward Harvey, friend Sam Goodall, and friend Greg Bragg.

To send flowers to the family in memory of Joyce Miller, please visit our flower store.