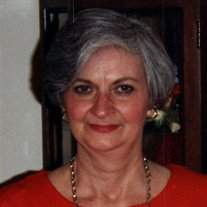 Joyce Ann "Bunny" Williams Anderson went home to be with her Heavenly Father on November 13, 2017.
Born April 25, 1935 she was the daughter of the late James P. and Maxine Frazier Williams.
Joyce was a 1953 graduate of Hinton High School and also a graduate of Beckley College. She was a retiree of the C&O Railway where she worked as a stenographer/clerk in the claim department. Joyce was a member of the Brotherhood of Railway and Steamship Clerks and Railway Business Women. She was a member of the Central Baptist Church and was an active member of the Summers County ARH Auxillary where she loved to volunteer her time helping others.
Joyce is survived by one son, Shawn Anderson and wife Carla J. of Winfield, WV; two sisters, Carolyn Seckel and husband Jack of Munhall, PA and Janet Dieli of Pleasanton, CA; granddaughter, Madelyn Anderson of Scott Depot; step granddaughters, Megan Keeney and husband Jon of St. Albans and Ashton Smith of Orlando, FL; two step great grandchildren, Jaxon and Savannah Keeney; two nephews, Robbie Merritt and wife Mary Beth of Hinton and their sons, Zachary and Nathan Merritt and Steven Dieli of Utah ; one niece, Heather Lynn Everett and husband Paul of Livermore, CA. .
Services will be held at 1:00 P.M. Thursday, November 16, 2017 at the Ronald Meadows Funeral Parlors with Pastor Robbie Merritt officiating. Burial will follow in the Restwood Memorial Gardens. Friends may call from 11:00 A.M. until service time on Thursday at the funeral parlors.
The family would like to thank Main Street Care and Hospice of Southern WV. They are truly angels on earth.

To send flowers to the family in memory of Joyce Anderson, please visit our flower store.