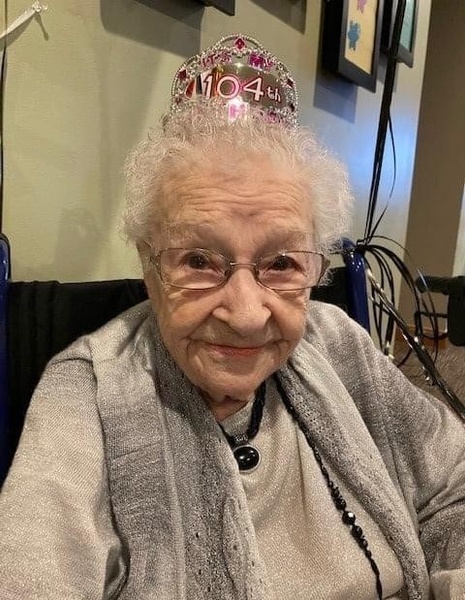 Josephine Chandler, 104, of Beaver formerly of Hinton went home to be with the Lord Thursday, October 14, 2021 at the Greystone Inn following a long illness.

Born March 2, 1917 at Hinton she was a daughter of the late John Henry “Doc” and Sarah Clementine Vance Adkins.

Josephine was an active member of the Beckley Church of God and had attended the Church of God her entire life.  She was one of the first female department managers with a large retail department store in Maryland.  Josephine loved to sew, crochet, craft, cook, and was an avid fisherman.

Those left to cherish her memory include several grandchildren, nieces and nephews; one sister, Blanche Wood of Beckley; two special nieces and caregivers, Jacqueline Standiford and husband Dick of Beckley and Donna Jo Feijo and husband Tim of Beckley.

Funeral services will be 1:00 P.M. Tuesday October 19, 2021 at the Ronald Meadows Funeral Parlors Chapel with Pastor Roy L. “Butch” Honaker and James “Wimpy” Adkins officiating.  Burial will follow in the Adkins Family Cemetery at Longbottom.  Friends may call from noon until time of services Tuesday at the funeral parlors.  Family and friends will serve as pallbearers.

To send flowers to the family in memory of Josephine Chandler, please visit our flower store.