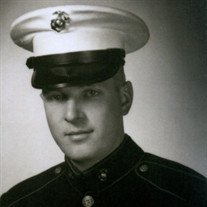 John Walter Kesler, 88, of Lowell passed away on Tuesday, May 07, 2019 at his home following a long illness.
Born May 28, 1930 at Lowell he was the youngest child of seven to the late Marion and Eva Gillispie Kesler.
John served in the U.S. Marine Corp. during the Korean war and was a self employed mechanic.
Preceding him in death were his siblings, Ruth, Janet, Richard, Jennie and Billy and two grandchildren, Devon Lee Kesler and Angelica Faith Kesler.
He is survived by his wife of 58 years, Jane Wiseman Kesler; sons, John David and wife Vicky, Tom and wife Jessica and Mark and wife Brenda; grandson, Christopher Kesler; sister, Nancy K. Piper; sister in law, Vesta Kesler; nieces, Betty Jo Coon, Pam K. Lyons, Rebecca Olsen, Beth Blair, Jane Mahoney and Mary Hull; nephews, Jim, Kenton and Joe Kesler and David Piper; several great nieces and nephews and special friends, Kenneth and Jean Willey.
At his request he will be cremated. A family graveside service will be held at a later date.
To send flowers to the family in memory of John Kesler, please visit our flower store.