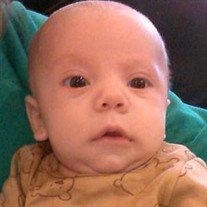 John David Calendine, III, born February 27, 2015 passed peacefully in his sleep at home on May 17, 2015.
John David was the infant son of John Calendine , Jr. and Katelyn Weiss of Wayside. John David also has a big sister at home, Paisley Weiss.
Paternal grandparents are Diane Calendine of Pence Springs and the late John Calendine, Sr. of Punta Gorda, Florida. Great-grandparents are Delma Ciesielski of Talcott and the late John Ciesielski.
Maternal grandparents are Stephanie and Greg Cochran of Clarksburg the late Tommy Adkins of Talcott. Great-grandparents are Haroldine Ward of Wayside and the late Emmett Weiss of Greenville.
John David also had two aunts, Dayna Adkins of Clarksburg the late Amy Calendine of Pence Springs.
He was also loved by many great aunts and uncles as well as a host of cousins.
Funeral services will be 1:00 P.M. Friday, May 22, 2015 at Ronald Meadows Funeral Parlors Chapel with Pastor Terry Utterback officiating. Burial will follow in the Barger Springs Cemetery. Friends may call from 11:00 A.M. until time of service Friday at the funeral parlor.

To send flowers to the family in memory of John Calendine, please visit our flower store.