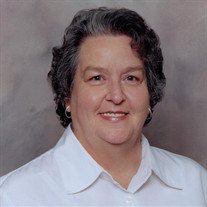 Jo Eleanor Hawkins Canterbury, 72, of Jumping Branch passed away Monday, May 9, 2016 at Main Street Care in Hinton following a short illness.
Born February 21, 1944 at Friendship, TN she was a daughter of the late Willie C. and Linnie Burrow Hawkins.
As a young girl Jo handpicked cotton in TN before her family relocated to Chicago and she held many jobs throughout her career from the age of 17. She was a graduate of Beckley and Concord College with a degree in Business Administration and attended Bluefield State College obtaining a certificate of Certified Professional Secretary International. Jo was a former supervisor for EDS Corp., she had worked at Key Data in Beaver, had served as Deputy in the Summers County Tax Office and retired from WVDHHR. She was an active member of the Order of the Eastern Star, a member of the Business and Professional Women (having held the title of State President for one year.), a Hinton Bobcat Boosterette for many years and a former member of the Red Hatters.
Jo enjoyed watching John Wayne movies, collecting trinkets, eating out and spending time with family and friends. She was the last surviving member of her immediate family.
Jo is preceded in death by one brother, Billy Hawkins and one sister, Demetra Williams.
Those left to cherish her memory include her husband of 51 years, James Canterbury; children; Charles Canterbury and wife Kelly, Jeanne Cline and husband Steve, James Canterbury II; four grandchildren, Alexis Canterbury, Torrey Smith, Rosa Cline and Tiffany Hannah and four great grandchildren whom she loved dearly.
Funeral services will be 11:00 AM Friday, May 13, 2016 at the Ronald Meadows Funeral Parlors Chapel with Pastor Robbie Merritt officiating. Burial will follow in the Restwood Memorial Gardens near Hinton. Friends may call from 6:00-8:00 P.M. Thursday at the funeral parlors. Family and friends will serve as pallbearers.

To send flowers to the family in memory of Jo Canterbury, please visit our flower store.