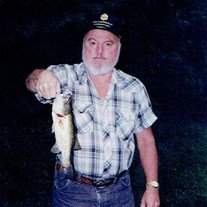 Jerry Lee Cox, 67, of Nimitz, WV, with his family by his side, passed away Sunday, December 7, 2014, at his home, following a long illness.
He was born to Robert C. Cox and Edith Simmons Cox of Glen Rogers, WV on June 14, 1947.
Jerry attended school at Glen Rogers and Woodrow Wilson High School. He was a Master Welder and electrician. He worked in manufacturing and fabrication at J.O. Lively Mfg., Radford and Farley, Busch Fabricating and Welding and B and E Construction. He was a proud member of the U.M.W.A. and worked for White Ridge Coal Co., Stotesbury Coal Co. and M.A.E. West. Jerry was best known as a "Jack-of-all-trades" and was always ready to help his friends and neighbors. He was of the Christian faith and attended Freedom Baptist Church. Jerry loved Bluegrass and Gospel music and spent much of his time with his wife at Gospel Sings throughout southern WV.
Other than his parents, he was preceded in death by a grandson, Jerry Dean Richmond; mother and father in law, Emma and Frank Richards and brothers in law, Robert Richards and David Harper.
He is survived by his wife of 50 years, M. "Rowdy" Richards Cox; daughter, Lisa Ann Payne (Mickey); son, Robbie Lee Cox (Tammy); two granddaughters, Michea Payne and Leea Cox; great grandson, Kyzer Lee Payne; twin brother, Larry A. Cox (Charlotte) of Lester, WV and sister, Kathy E. Harper of Hampton, GA. He also leaves behind beloved sister in law, Sharon Richards and nieces, Melissa Richards and Emma Crook who acted as caregivers in his final days; sister in law, Gloria Webb (Jimmy); brother in law, Matthew Richards (Betty); best friend, Eddie Ratliff and many dear nieces, nephews, friends and neighbors.
Funeral services will be 1:00 P.M. Thursday, December 11, 2014 at Ronald Meadows Funeral Parlors Chapel with Pastor Ernest Calfee officiating. Burial will follow in the Lilly-Crews Cemetery at Nimitz. Friends may call from 11:00 until time of services at the funeral parlor.
Robbie Cox, Matt Richards, Mickey Payne, Eddie Ratliff, Phillip Harvey, Cecil Whitt, Benny Spade and Brady Weikle will serve as pallbearers.
The family wishes to express a special "thank you" to the members of the J.B. Nimitz VFD and Roy Crook for their showing of love and support throughout this trying time.

To send flowers to the family in memory of Jerry Cox, please visit our flower store.