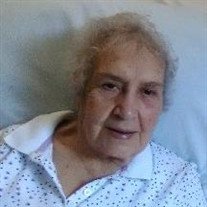 Janet Gilpin Breen, 82, of Russell, KY, formerly of Hinton passed away Sunday, October 28, 2018 at Oakmont Manor surrounded by loving family.
Born November 5, 1935 at Hinton she was a daughter of the late Walter (Buddy) and Georgia Anderson Gilpin.
Janet was of the Baptist faith, she was a member of the Bellepoint Baptist Church where she was baptized on August 14, 1968. She was a LPN at the old Hinton Hospital from 1971 - 1977. Janet enjoyed quilting, sewing, reading, cooking, canning and traveling. She always had a story and will be missed by many.
Janet was preceded in death by her husband of 48 ½ years, Ray Breen; her beloved daughter, Helen Breen Pack and her only sibling sister, Patti Buckland.
Those left to cherish her memory include her son, Jimmy Breen (Linda) of Kernersville, NC; daughter, Donna Sparks (Greg) of Russell, KY; eight grandchildren, Lee Pack (Christina), Kelly Pack (Joe), Steve Pack (Carrie), Sam Pack (Tiffany), Nicholas Breen, Jaime Velasquez (Sergio), Jessica Stokes and Jayme Fannin (Garrett); twenty one great grandchildren; double first cousin, Darryl Worrell (Ann) of Crab Orchard; sister-in-law, cousin and best friend, Janice Breen; longtime friend of Hinton, Betty Deborde of Flatwoods, KY; close caregiver, Amber Pennington (Tyler) of Wurtland, KY and many nieces and nephews. The staff and residents at Oakmont Manor in Flatwoods, KY were like family to Janet. That was her home. Janet enjoyed being roommates with Betty Collier for the year that she was there.
Funeral services will be 1:00 Saturday, November 3, 2018 at the Ronald Meadows Funeral Parlors Chapel burial will follow in the Breen Cemetery near Hinton. Friends may call from noon until time of services at the funeral parlors on Saturday.

To send flowers to the family in memory of Janet Breen, please visit our flower store.