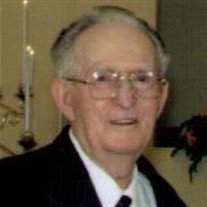 James Robert "Jim Bob" Lilly, 88, of Nimitz went to be with his Lord and Savior on the morning of April 3, 2015 after a long illness.
Jim Bob proudly served in the U.S. Navy as a Third Class Boatswain and First Class Seaman from 1947-1951 on the USS Warrington DD 843 Destroyer out of Newport, Rhode Island. He sailed the Pacific and the Mediterranean, but it was in New England where he had the great fortune of encountering the love of his life, Ethel "Little Ett" Stanford. Upon completing his service in the Navy he and Ethel married in Fall River, MA in June of 1952. The young couple quickly settle on Jim Bob's family farm in Nimitz, WV and began a family of their own.
He worked as a brakeman for the C&O railroad for over 40 years; however his true calling was that of a teacher. He worked the land he lived on every minute available and his family will agree that some of the best times spent with him included times when he was teaching those around him how to plow the garden with the tractor, mending fences, stacking hay, trimming the water sprouts on the apple trees so they produced more fruit, and many skills of self reliance.
Jim Bob was not only a teacher of self-reliance and hard work but also a teacher of honesty, family value, faith, peace, and grace. He was a member of Bluestone Baptist Church for over 30 years.
He is preceded in death by his parents, Carl and Ethel Lilly; siblings, Ola Mae Lilly and Carl Lilly Jr.
Jim Bob's legacy will be carried on in that of his surviving family members including his beloved wife, Ethel Lilly; children, Debbie Rollyson and husband Steve, Donna Rollyson and Alan Lilly; Brother, Henry Lilly and wife Elaine; Grandchildren, Melissa Rollyson and fiancé Nathan Price, Laura Howell and husband Kenny, Adrian Rollyson and wife Michele and James Andrew Rollyson; Great Grandchildren, David "D.J." Staley, Madison Rollyson, Kash and James Rhyce Howell, and Paisley and Gracin Price; Nieces and Nephews, Rick and Sheila Lilly, Susan Lively, Kyle Lively, Lakyn Lively, Kaileb Carr, McKaylah Lilly, Nicholas Lilly and Adyson Carr; former son in law Charles Rollyson and his favorite caninie companion Jack.
The family would like to thank all of Jim's wonderful friends, neighbors and his fellow members of Bluestone Baptist Church, Pastor Bill Fox, The Beckley ARH Staff and all involved for their care, love and support throughout this process.
Funeral services will be 1:00 P.M. Tuesday April 7, 2015 at the Bluestone Baptist Church with Pastor Bill Fox officiating. Burial will follow in the Lilly Crews Cemetery in Nimitz. Friends may call from 6-8 PM Monday at the Bluestone Baptist Church in Jumping Branch. Pallbearers will be Adrian and Andy Rollyson, Chuck and Steve Rollyson , Rick and Nicholas Lilly. In lieu of flowers the family requests that a fruit tree be donated if you wish. An orchard has been started in Jim Bob's memory.

To send flowers to the family in memory of James Lilly, please visit our flower store.