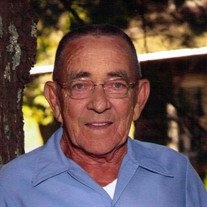 Ira Joseph "Joe" Meadows, 85, of Hilldale, passed away on Friday, July 22, 2016 at Summers County ARH Hospital following a long illness.
Joe was born at home on Camp Lightfoot Road on September 18, 1930 to Willie Joseph and Daisy Allen Meadows. He was a member of the class of 1949 at Talcott High School. He worked at Hinton High School and the United States Postal Service in Hinton, served his country in the United State Marine Corp. during the Korean War era and he was of the Methodist Faith. Joe enjoyed working on his farm, hunting, tending to the garden and finding bargains at the flea market. He will be missed by all for his four-wheeler rides, delicious homegrown vegetables, watermelon, strawberries and the way he loved all of his grandkids.
Besides his parents he was preceded in death by four sisters, Thelma Thompson, Romona Ramsey, Ruth Fisher and his infant sister Margie Carol and three brothers, Lake, Roy and Frank Meadows.
Those left to cherish his memory include his wife of 61 years, Shirley Sears Meadows, two sons, Billy Joe Meadows and wife Kathy of Jacksonville, FL and Gary Meadows and wife Cindy of Pleasant View, TN, one daughter, Diana Hedrick and husband Steve of Camp Lightfoot Road, Hinton, six grandchildren, Lt. Joe Meadows USN, Jonathan Meadows, Bethana Jo Meadows, Kelly Burke, Nathan Hedrick and Kassi Coleman, eight great grandchildren, Alayna and Katalyn, Preston, TJ and Michael, and Koltin, Alyssa and Gage, and Aedan and one special niece, Jennifer Clayton.
Funeral services will be held 11:00 am Tuesday July 26, 2016 at Mt. Pigsah United Methodist Church with Pastor Benny Allen officiating. Burial will follow in the Mt. Pigsah United Methodist Church Cemetery with military honors. Friends may call from 10:00 am until service time at the church.
Family and friends will serve as pallbearers.

To send flowers to the family in memory of Ira Meadows, please visit our flower store.