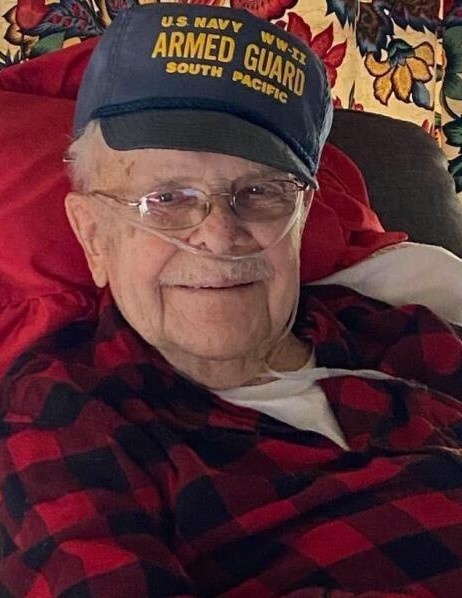 Hobert Gladwin Adkins, 94, of Huntington, formerly of Meadow Creek went home to be with the Lord Sunday, April 4, 2021 at home following a long illness.

Born August 25, 1926 at Abraham he was a son of the late Basil Kyle and Dora Frances Smith Adkins.

Hobert was a gunner in the U.S. Navy Armed Guard, having served during World War II. He was a retired C&O Railroad Operator/Clerk with 38 years of service.  Hobert attended Meadow Creek Baptist Church and Lewis Memorial Baptist in Huntington. He enjoyed watching his grandchildren play sports and cheering, sitting on his porch visiting with friends, family and neighbors and coin and stamp collecting.

Hobert was preceded in death by his wife, Anna Rose “Rosebud” Adkins; one daughter, Angela Rose “Kiki” Adkins Ott; one brother, Theo Adkins and one sister in law, Rachel Adkins.

Those left to cherish his memory include one son, Jay Adkins and wife Pam of Huntington; two grandchildren, Will and Delaney of Huntington and several nieces, nephews and cousins.

Graveside services and burial will be 2:00 P.M. Saturday, April 10, 2021 at the Parker Cemetery, 331 Parker Lane, Nimitz, off Leatherwood Road with Pastor William A. Thompson officiating. Friends are asked to meet at the cemetery at 1:30 P.M. on Saturday prior to services. Family and friends will serve as pallbearers.

To send flowers to the family in memory of Hobert Adkins, please visit our flower store.