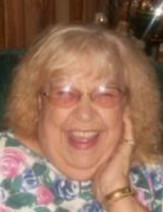 Eunice Virginia Raines, 85, of Hinton passed away Thursday, July 2, 2020 at the Bower Hospice House under their loving care.

Born September 16, 1934 at Talcott she was a daughter of the late Lonnie and Rachel Adkins.

Eunice was a loving homemaker who dedicated her life to raising her family. She never knew a stranger and took in anyone who needed her love for a day, a year or a lifetime.  Eunice was known for her contagious laughter and her amazing way with children. She will be dearly missed by all who knew and loved her.  “The queen has laid down her crown.”

Funeral services will be 12:00 P.M. Saturday, July 4, 2020 at the Ronald Meadows Funeral Parlors with Pastor Eddie Crews officiating. Burial will follow in the Oak Grove Cemetery at Ballengee. Friends may call from 10:30 A.M. until time of services at the funeral parlors. For the safety of the family and community precautionary guidelines will be followed.

The family would like to thank the staff of Hospice of Southern WV and Bowers Hospice House for the exceptional love and care given to Eunice.

To send flowers to the family in memory of Eunice Raines, please visit our flower store.