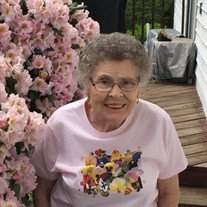 Jean Deeds, 87, of Milton formerly of Hinton, WV went home to be with the Lord on Monday January 14, 2019.
Born June 29, 1931 in Summers County she was the daughter of the late Rufus Blane and Delphia Bragg Richmond.
She was preceded in death by her husband Charley Raymond Deeds in August of 1967 and one daughter; an infant, Cindy Lou Deeds; three full sisters, Ruby Crum, Margie Cales, Glenna Petrey; three full brothers, Johnny, Jerry and Burner Richmond. She was also preceded in death by four half-sisters, Macil Fox, Nellie Bragg, Edna Ward, Anna Graham and two half-brothers, Herb and Clyde Richmond.
She is survived by one daughter, Patty Deeds of Milton with whom she made her home for the past 10 years. She is also survived by one sister, Pat Humphrey (Lloyd) of North Ridgeville, OH.
Funeral services will be held at 1:00 pm Thursday, January 17, 2019 at the Ronald Meadows Funeral Parlor Chapel with Pastor Robbie Merritt officiating. Burial will follow in Upland Cemetery. Friends may call from 5:00 pm to 7:00 pm on Wednesday, January 16, 2019 at the funeral parlor.

To send flowers to the family in memory of Erma Deeds, please visit our flower store.