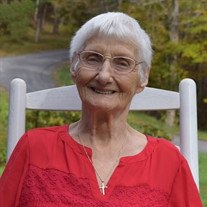 Edna E. Shrewsberry Faris, 90, of Indian Mills, WV, died Monday, November 2, 2015, at the Princeton Community Hospital, following a short illness.
Born October 11, 1925 at Indian Mills, she was the daughter of the late Henry H. and Eunice McDowell Shrewsberry, and was lifelong resident of Summers Co.
Edna worked as a cook at the 4-H camp for several years and had worked at Camp Lightfoot for more than 30 years. She finally retired at the age of 88. Edna was an avid WVU fan for all sports, in fact, she loved any sport all the time. She attended the Thompson's Chapel Church at Mandeville.
Besides her parents, she was preceded in death by an infant son, Gene Blane Faris, a daughter, Becky Faris, a daughter-in-law Beverly Faris, one sister, Wanda Keatley Foster, three brothers Andrew, Bill and Marshall Shewsberry and two infant siblings.
Survived by four daughters, Carol Oakes of Bartlett, TN, Gail Pack and husband Richard of Ballard, Sherry Faris of Conover, NC, and Teresa Johnson and husband David of Bozoo. Four sons, Jeff Faris and wife Pam of Narrows, VA, John Faris and wife Chris of Maiden, NC, James Faris and wife Dora of True, WV and Richard (Ricky) Faris of Catawba, NC. One sister Leona (Lee) Shrewsberry of Beckley. Several Grandchildren, Great Grandchildren and Great Great Grandchildren also survive.
Funeral services will be held at 1:00 P.M. Thursday at the Ronald Meadows Funeral Parlors Chapel in Hinton with Pastor Bill Fox officiating. Burial will follow in the Indian Mills Cemetery. Friends may call at the funeral parlors from 6-9 p.m. Wednesday. Her grandsons all serve as pallbearers.
In lieu of flowers, donations of sympathy should be made to St. Jude Children's Research Hospital, 262 Danny Thomas Place, Memphis, TN 38105, in honor of her great granddaughter Emma Gilpin who is being treated there at this time.

To send flowers to the family in memory of Edna Faris, please visit our flower store.