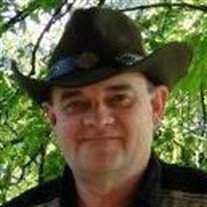 Dwight D. "E-Boy" Richmond, 61, of Abingdon, VA formerly of Brooks, WV went home to be with the Lord Friday, July 15, 2016 at the Johnston Memorial Hospital in Abingdon, VA following a battle with cancer.
Born March 1, 1955 at Brooks he was a son of the late Chalmer and Mamie Bragg Richmond.
Dwight attended the Woodland Baptist Church of Abingdon; was formerly the warehouse manager for Surface Bananna Inc.; delivered the U.S. Mail for Graham Trucking and was the co-owner of Cecil's Market in Abingdon. He was a member of the Black Wolf Harley Davidson Chapter of the Harley Owner's Group in Bristol, VA and enjoyed being "free" riding his motorcycle and a believer in Christ, as well as spending time with family and friends.
Preceding him in death are his three brothers; Sam, Jimmy, and Russell Jack Richmond.
Those left to cherish include his loving wife of 33 years, Ellen Kay Richmond at home; one daughter, Melanie Kay Richmond and fiancé Tyler Clay Blankenship of Charleston; one sister, Wilma "Peggy" Richmond and husband Gene of Richmond, VA; a special family member whom he reared, Autumn Nicole and her son Ryan Blade Anderson; two lifelong and dear friends, Danny Meadows and Harold Spicer.
Funeral services will be 11:00 A.M. Wednesday, July 20, 2016 at the Ronald Meadows Funeral Parlors Chapel with Pastors Bob McCormick and Michael Bockarie officiating. Burial will follow in the Meadows Family Cemetery at Longbottom, New River Road, Hinton. Friends may call from 6-8 PM Tuesday at the funeral parlors. Family and friends will serve as pallbearers. In lieu of flowers donations of sympathy may be made to the St. Jude's Foundation.

To send flowers to the family in memory of Dwight Richmond, please visit our flower store.