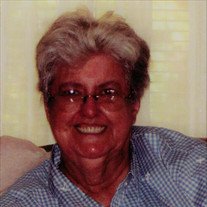 Drema L. Adkins, 79 of Beckley passed away Saturday March 25, 2017 at the Bowers Hospice House following a long illness.
Born April 16, 1937 at Thayer WV. She was a daughter of the late Okey W. and Thelma G. Cooper Compton.
Drema was of the Christian Faith, a former employee of G.C. Murphy Co. in Hinton and Montgomery Ward's in Beckley. She enjoyed crafts, cooking and taking care of her beloved dog "Maggie".
She was preceded in death by her husband Garnet Vernon Adkins.
Those left to cherish her memory include one loving son Randy W. Adkins of Beckley.
Funeral services will be 1:00 PM Monday, March 27, 2017 at Ronald Meadows Funeral Parlors Chapel with Pastor Gary Adkins, officiating. Burial will follow in the Fox Cemetery at Brooks. Friends may call from noon until time of services Monday at the funeral parlor. Family and friends will serve as pallbearers.
In lieu of flowers donations of sympathy may be made to the Bowers Hospice House at 454 Cranberry Drive Beckley, WV 25801.

To send flowers to the family in memory of Drema Adkins, please visit our flower store.