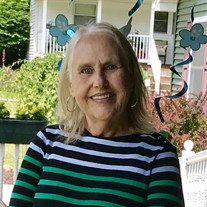 Donna Bird Meador, 67, of Bellepoint went home to be with the Lord Friday, April 12, 2019 at Thomas Memorial Hospital following a long illness.
Born June 9, 1951 at Hinton she was a daughter of the late Don Mason and Lucille Smith Bird.
Donna was a member of the Nimitz Missionary Baptist Church where she actively served in the John & Romans Ministry. She was a former supervisor of the aerial tramway at Pipestem State Park and enjoyed taking pictures and spending time with family and friends including her former co-workers at the tram.
Donna was preceded in death by one brother, James Richard "Jimmy" Bird.
Those left to cherish her memory include one daughter, Robin Meador Hatcher and husband Chuck of Flat Top; one son, Marshall Meador and wife Staci of Hinton; ten grandchildren, Haylee, Madeline, Sloan, Myrecal, Mekia, Britani, Mia, Robert, Ralphie and Kenya; three great grandchildren; siblings, Carol Wolfe and husband Larry of Indianapolis, IN, Wesley Bird and wife Diana of Columbia, MO, JoAnn Cales and husband Gary of Galloway, OH, Nancy Jordan and husband David of Tucson, AZ and Martha Conner and husband Tim of Claudville, VA; sister in law, Terry Bird of Jumping Branch and many nieces, nephews and cousins whom she loved dearly.
Funeral services will be 8:00 P.M. Tuesday, April 16, 2019 at the Ronald Meadows Funeral Parlors Chapel with Pastors Kelly Bowman and Don Hannah officiating. Visitation will be from 6:00 P.M. until time of services Tuesday at the funeral parlors. Following the services the body will be cremated and interred at the Lilly-Crews Cemetery at a later date.
The family would like to extend special thanks to Danny Meador and Ann Tassos for all of their assistance during Donna's transition to her heavenly home.

To send flowers to the family in memory of Donna Meador, please visit our flower store.