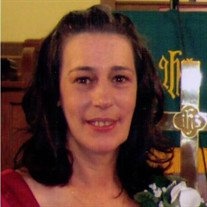 Donna S. Davis, 55, of Hilldale went home to be with the Lord May 26, 2015 at her home following a short illness.
Born May 15, 1960 in Beckley, she was a daughter of the late Frederick William and Luella Forren Smith.
Donna was a 1978 Woodrow Wilson High School Graduate and had graduated with honors from MSU. She worked as a Secretary at Oak Hill Garbage in Lanark for 23 years. Donna enjoyed motorcycling, collecting Precious Moments and Native American figurines and watching youth sports. Her world revolved around the joy she had for her children, grandchildren and great grandchildren.
Besides her parents, she was preceded in death by her first husband, Wayne Lewis Pack; one son, William James Pack; brother-in-law, Wilby Daniel Aliff and nephews, James "Bo" Bailey, Ronald Wayne Smith and Daniel Wayne DeMarchi.
She leaves behind her husband of 33 years, Jeffrey Scott Davis of Hilldale; one son, Justin Heath Davis of Hilldale; one daughter, Brittany Dawn Phillips and husband Kenny Phillips of Hilldale; seven grandchildren, Drake, Myranda and Maddison Davis of Coal City, Ethan Phillips of Hilldale, Brooke and Braelyn Davis of Hinton and Heather Weikle and husband Brandon of Zion Mtn.; three great grandchildren, Payten, Hunter and Hobart Weikle; two brothers, Frederick Arthur "Ted" Bailey and wife Sandra of Logansville, GA and Frederick Ray "Fred" Smith and wife Pat of Beaver; one sister, Vickie Aliff of Beckley; three nieces, Kim Grisham of Iowa, Pamela Pate of TN, and Telena Bennett of Beckley; one nephew, Wilby "Danny" Aliff of Beckley; mother-in-law, Lucinda Ayers of Hilldale, father-in-law, Jack Davis of Princeton; two sisters-in-law, Christina "Chrissy" McDaniel of Hilldale and Katrina "Keewee" Crook and husband Douglas of Jumping Branch and one brother-in-law, Anthony "Tony" Davis and wife Sue of Waynesboro, VA.
Funeral services will be 12:00 P.M. Saturday, May 30, 2015 at the Ronald Meadows Funeral Parlors with Pastor Robbie Merritt officiating. Burial will follow in the Blue Ridge Memorial Gardens at Beckley. Friends may call from 10:00 until time of services at the funeral parlors on Saturday. Anyone who is unable to make it to the service is welcome to meet the family at the cemetery at 1:30 P.M for the burial.
Friends of the family will serve as pallbearers.
In lieu of flowers the family requests that donations be made to the American Lung Association or Hospice of Southern West Virginia.

To send flowers to the family in memory of Donna Davis, please visit our flower store.