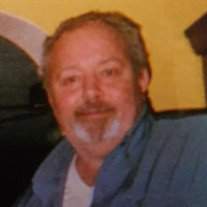 Donald Curtis "Bubby" Richmond, 56, of Woodbridge, VA dear devoted son, gentle and beloved brother, departed this world on Monday, November 19, 2018 surrounded by his family.
Donald was born March 10, 1962 in Hinton to Hettie Bragg Richmond and
Donald Curtis Richmond Sr. Donald Sr. died on the day Donald Jr turned five months old. God in his eternal wisdom sent Columbus Jackson Graham into our blessed lives and he was our earthly father who was adored by all his children, but was also Donald's best friend. The two of them were inseparable. Donald became the chief care taker of his father in the last five years of his father's life.
His chosen profession was in the automotive industry and he was a well-respected auto painter who was described by many as a true artisan who could "lay down a coat of paint like da vinci".
Donald was a Christian. The real deal kind, who literally took the coat off his own back on a cold winter's day for a homeless man, then walked home in the cold. He had his own battles that he fought on a daily basis but was never too busy or too tired to lend a hand to his family or even a complete stranger. He fought a brave and courageous battle against cancer and in the end he won that battle by receiving his reward of eternal salvation.
Those waiting for him at the gates of heaven are his earthly father Columbus Jackson Graham who lit up like a Christmas tree when he saw his "Little Buddy" coming up the hill, just one hour and fifteen minutes late for his birthday saying, "Welcome home son, welcome home;" his birth father will now be able to know the son that he only gave life to; his little nephew, Streeter Jackson Graham; grandparents and countless other ancestors who have gone on before him.
He leaves behind his loving mother, Hettie Graham; sisters, Donna (Glen) Brown, Corsonda Richmond, Roberta Graham; brother, Christopher Jack Graham; nephews, David Richmond (Jessie), Glen Brown, Jr; great nephew, Oliver Jackson Richmond; aunts and uncles, Basil Bragg, Sue Morgan, Gene and Peggy Richmond and countless cousins. He was especially close to his cousin Marilyn Garten and also leaves his dear and special friends Anna-Marie Brown and Van Miles.
The world is sadder today for the loss of this gentle loving soul. The night of his death the nurses who cared for him during his illness gathered in his room to pray with the family and shed tears of sorrow. He was kind to every living thing and saw the spark of God in everyone he met.
We will be joining together at Ronald Meadows Funeral Parlors Chapel on Tuesday November 27, 2018 at 1:00 pm with Pastor Bill Fox to celebrate our brother's life. If you are able we ask you to join us there, if you are not able please join us in prayer. Visitation will be from 11:00 am until time of services Tuesday at the funeral parlors. He will be buried in the Graham Family Cemetery.
At this time the family would ask each of you to love each other. Hug your parents and siblings, kiss them hello and good-bye and cherish the time you have with them because it will never be enough time and in the end surround them with love, because love is all we really have in this world and the only thing we can take with us.

To send flowers to the family in memory of Donald Richmond, please visit our flower store.