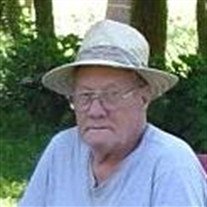 Donald Ray Milam, 88, of Clayton following a battle with cancer went to be with the Lord, Monday, February 25, 2019 at the VA Medical Center in Beckley.
Born march 9, 1930 at Saxon, WV he was the son of the late Benjamin and Della Wills Milam.
Donald was a lineman in the US Army serving during the Korean Conflict. He was a former timberman for Asplundh Tree Company in PA, as well as working for Allenwood Steel Company and J. Howard Pew Estates. Donald was a former volunteer fireman at Talcott VFD. He was a farmer and loved fishing. Donald was the last surviving member of his immediate family.
He was preceded in death by two brothers, Densil Milam and an infant brother and three sisters, Edith Bailey, Erma Agnes Brown and Mary Pettrey.
Those left to cherish his memory include his wife of 64 years, Mary Ann Cox Milam at home; two sons, Donald Eugene Milam and wife Julie of Clayton and Dwayne Lee Milam of Clayton; two grandchildren, Donald Christopher Milam and Kimberly Milam; three great grandchildren, Drake Milam, Nick Milam and Raymond Milam; special niece, Elaine Pettrey; special nephew, Jim Davis; several other nieces and nephews; special veterans, doctors, nurses of the fourth floor and John and Delores Yost.
Graveside services and burial will be 2:00 P.M. Saturday, March 2, 2019 at the Clayton Baptist Church Cemetery with Pastor Bobby Reed officiating. Friends are asked to meet at the cemetery from 1:30 Saturday until time of services. Family and friends will serve as pallbearers.

To send flowers to the family in memory of Donald Milam, please visit our flower store.