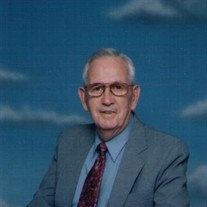 Dana Joe Keaton, 90, of Pipestem went home to be with the Lord Thursday, March 3, 2016 at Princeton Community following a long illness. Born January 2, 1926 at Pipestem, he was the son of Lonnie B. and Josie Vest Keaton. He was a U.S. Navy Veteran of World War II, Graduated from Hinton High School with class of 1947. Dana later attended West Virginia Business College at Bluefield. During the 1950's he served 8 years as Deputy Assessor under the late Howard Bugg, Jr. and during the 1960's he served 6 years as member and President of the Summers County Board of Education. He helped charter the Pipestem Ruritan Club in 1965 and remained a member for 26 years. He worked 37 years for the West Virginia Department of Agriculture, retiring in 1987.
Three years after returning from the Navy he became a Christian and soon started singing with various groups from Summers, Raleigh and Mercer Counties. He loved gospel singing. He was instrumental in reactivating the abandoned Rocky Mount Community Church at Pipestem.
In addition to his parents, he was preceded in death by two loving wives, June Neely Keaton, May 15, 1994 and Iris Kessenger Hitt Keaton, September 24th, 2011. Three brothers Glendon E. Keaton, Samuel Jennings Keaton and Charles Russell Keaton, two sisters Francis Hambrick and Julia Perry and one niece Almeda Coburn.
He is survived by two sons, Glendon A. (Glen) Keaton and wife Natasha of Bluffton, South Carolina and Gary Joe Keaton and wife Becky of Beaver, West Virginia; one daughter, Connie Jean Stanton and husband Skip of Chesapeake, Virginia; seven grandchildren, Michaela, Josie, Brandi, Luke, Danielle, Kelley and Ashley; three great granddaughters, Lilly, Emma and Kaileigh and several nieces and nephews also survive.
Funeral services will be held 2:00 pm Sunday, March 6, 2016 at the Ronald Meadows Funeral Parlors Chapel with Pastor Bobby Hambrick officiating. Burial will follow in the Keaton-Vest Family Cemetery at Gravelly Point with Military Honors. Friends may call from noon until service time on Sunday at the funeral parlors.
Family and friends will serve as pallbearers.
In lieu of flowers the family requests that donations are to be made to the Rocky Mount Community Church at Pipestem.

To send flowers to the family in memory of Dana Keaton, please visit our flower store.