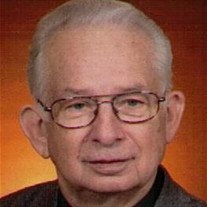 Clifford A. Cales, 80, of Meadow Bridge entered into eternal rest with his Heavenly Father Tuesday, January 13, 2015 at Beckley Appalachian Regional Hospital following a short illness.
Born March 21, 1934 at Green Sulphur Springs, he was a son of the late Roy H. and Mamie C. Bryant Cales.
Cliff graduated from Sandstone High School and Moller Barber College in Cincinnati, OH. He was a former motor winder with Siemens in Norwood, OH. Cliff was a barber for 39 years, having barbered with Cales Brothers Barber Shop in Milford, OH., and was the owner and operator of Cliff's Barber Shop in Hinton, WV for the past 22 years. He was a Veteran of the U.S. Army Reserves, in which he served from 1957- 1963. He was a member of the Meadow Bridge Kiwanis Club. Cliff had attended Milford Christian Church in Milford, OH for 35 years, and his home church Bellepoint Baptist Church for the past 6 years. He was an avid gardener and outdoorsman and loved spending time with family and friends.
Cliff was preceded in death by one brother, Obie R. Cales.
Those left to cherish his memory include his wife of 58 years, Phyllis Wickline Cales at home; children, James A. Cales of Elsmere, KY, Joseph R. Cales of Goshen, OH and Jill A. Smith and husband Paul of Mt. Vernon, OH; five grandchildren, Steven, Gwen, Nicole, Paul Jr. and Marshall; five great grandchildren, Savannah, Jasmine, Damon, Haley and Teighlor; three sisters, Mary Oma Fleshman of Princeton, Freda Cales Gwinn and husband Franklin of Smoot, and Agnes Osborne and husband Richard of Williamsburg, OH; two brothers, Harden Cales and wife Mary of Peebles, OH, and David Cales of Nimitz; and numerous nieces, nephews, and cousins who loved him dearly.
Funeral services will be at 1:00 PM Saturday January 17, 2015 at Ronald Meadows Funeral Parlors Chapel with Pastor David Board, Pastor Chris Price and Pastor Robbie Merritt officiating. Burial will follow in the Wickline Family Cemetery at Meadow Bridge. Friends may call from 6:00 PM - 8:00 PM on Friday at the funeral parlors.
Family and friends will serve as pallbearers.
In lieu of flowers donations may be made to Bellepoint Baptist Church Missions.

To send flowers to the family in memory of Clifford Cales, please visit our flower store.