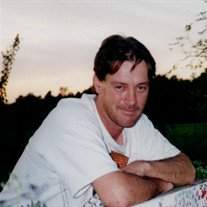 Christopher Michael Norris, 54, of Sandstone formerly of Paducah, KY passed away peacefully in his sleep on Saturday, February 16, 2019 at the Bowers Hospice House in Beckley following a short illness.
Born in Taunton, MA on April 24, 1964 he was a son of Edward F. Norris of Las Vegas, NV and Sandra Lee Faratus Norris of Montpelier, VT. Chris was raised by his late grandparents Robert and Betty Norris Murray in Lakeville, MA.
He enjoyed listening to rock music, fishing, watching NASCAR, football and attending classic car shows. He was a kind person loved by all who knew him. Chris loved spending time with friends and family. He was of the Catholic faith, an altar boy at a young age and attended Sacred Heart Catholic High School in Kingston, MA. He had worked as a house painter, forklift operator, yacht salesman, landscaper and worked for Hix Mountain Construction. His hobbies were gardening, woodworking and cooking (especially on the grill). Chris was particularly fond of WV, the beauty of the mountains and rivers. He would have liked for people to remember him as he was the last time they saw him. Chris's attitude about life and advice to everyone was "Rock On."
Besides his grandparents he was preceded in death by his wife Darlene Weitbrect Norris and step sons Christopher and Michael Smith.
Other than his parents, those left to cherish his memory include his children, Joshua Murphy of Avon, MA, Kristen Norris of Jacksonville, FL, Melissa Meador and husband Rocky of Forest Hill; step daughters, Regina Marshall and husband of Paducha, KY and Rachelle Cozort of Forest Hill; step son, Matthew Dewrell of Paducah, KY; grandchildren, Grey Norris, Lillian-Rose Verde, Emma Verde and Lana Meador; siblings, Stacy Lynn Norris of Montpelier, VT and Raymond Fratus of Montpelier, VT and many loving cousins, aunts, nieces, nephews and dear friends.
Per Chris's request he has been cremated and there will be no funeral services.
To send flowers to the family in memory of Christopher Norris, please visit our flower store.