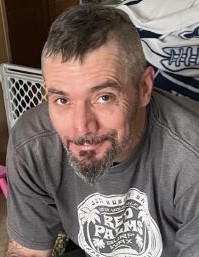 Born December 4, 1974 at Hinton he was a son of Linda McMillion Gunter Wiker and Michael Wiker of Hilldale and the late Charles Gunter Sr.

Sonny was a welder, a carpenter and an avid sports fan. He enjoyed hunting and fishing.

Besides his mother and stepfather, those left to cherish his memory include, two daughters, Whitney Gunter of NC and Megan Gunter of Hilldale; one son, Dustin Byars of Ravencliff; one granddaughter, Serenity Gunter of Hilldale; two sisters, Tonya Gunter Freeman and husband James of NC and Angela Caldwell and husband Sketter of VA; three very special nephews, Dale Baker, Jeremy Baker and Tyler Baker all of NC; step grandparents, Ronnie and Patricia Lilly of Princeton; girlfriend, Kristi Hicks of True and special friends, Roy Blankenship and Kit Durnan.

Funeral services will be 3:00 P.M. Friday, February 5, 2021 at the Ronald Meadows Funeral Parlors Chapel with Alfon Cook officiating. Visitation will be from 1:30 P.M. until time of services on Friday at the funeral parlors. For the safety of the family and the community precautionary guidelines will be followed. Following the services the body will be cremated.

To send flowers to the family in memory of Charles "Sonny" Gunter Jr., please visit our flower store.