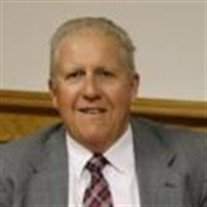 Charles E. "Eddie" Willey Jr., 66, of Hinton went home to be with the Lord Friday, December 25, 2015 following a short battle with cancer.
Born April 11, 1949 at Hinton he was the son of Katherine Young Willey of Hinton and the late Charles E. Willey Sr. Eddie was a 1967 graduate of Hinton High School, member of the Brotherhood of Operating Engineers #132, Heavy Equipment Operator for many years working for numerous companies, retiree from the WVDOT with 31 years of service having served as Assistant Superintendent. Served the City of Hinton as Asst. Fire Chief for many years and was the Founder and Co-Owner of Southern Mortuary Service. Eddie currently joined his new family for the past 4 years at the Ronald Meadows Funeral Parlors as a Funeral Attendant and most importantly as a close friend. Eddie's desire was to regain his health and to come back to work for as long as he could. He enjoyed operating heavy equipment, gardening, the outdoors, doing every task to perfection and spending time with his family, friends and his grandchildren. Eddie was a loving, devoted and loyal husband, father, grandfather and friend.
Besides his mother those left to cherish his memory include his devoted wife of 47 years, Linda "Connie" Willey of Hinton; his son, Arthur "Cubby" Willey and wife Jennifer of Niceville, FL; his daughter, Stephanie Elkins and husband Terry of Hinton; two grandchildren, Cameron Jean Willey and Zachary Cole Willey both of Niceville, FL; one sister, Kathy Rice and husband Wayne of Hinton; one brother, Johnny Willey of Hinton; one niece, Lori Willey of Hinton; three nephews, Corey Lambert and wife Casey of Lewisburg, Cody Rice and wife Dianne of Bluefield, VA and John Willey of Grand Junction, CO; one great niece, Kendall Willey; one great-great nephew, Easton Willey; Lifelong friend, Luther Wills Jr. and many special friends too numerous to list.
Funeral services will be held 1:00 pm Monday, December 28, 2015 at the First Baptist Church of Hinton with Pastors Robbie Merritt and Jeff Canterbury officiating. Burial will follow in the Indian Mills Cemetery. Friends may call from 6-8 pm Sunday, December 27, 2015 at the Ronald Meadows Funeral Parlors and one hour prior to service time at the Church.
Jake Taylor, Joe Blankenship, Dale Hedrick, Steve Hedrick, Ben Sears, Ralph Trout and Seth Snavely will serve as pallbearers.
Luther Wills Jr., Ronnie Smith, Proctor Kirk, Franklin Bowles, Cole Willey and the staff of the Ronald Meadows Funeral Parlors will serve as honorary pallbearers.


To send flowers to the family in memory of Charles Willey, please visit our flower store.