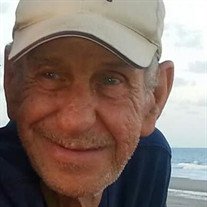 Charles W. Burks, 77, of Forest Hill formerly of Princeton journeyed to his heavenly home Sunday November 20, 2016 at his home.
Born August 31, 1939 in Wyoming County he was the son of the late Wade and Virginia Junkins Burks. Charlie was a proud United States Army Veteran and a coal miner until his retirement from Buchanon Coal Company. He loved hunting and playing on his tractors. Charlie will be fondly remembered for his twinkling blue eyes, great big smile and kind spirit with which he blessed the lives of so many going above and beyond in his goodness and love of others. Charlie loved the Lord and was saved under the ministry of Pastor and lifelong friend C. B. Shrader.
Preceded in death by his maternal grandparents, John and Cosby Shell; first wife, Sandra Burks; step-son, Ricky Donley; one brother, Bobby Burks and one sister, Irene Barton.
Those left to cherish his memory include his wife, Margie Burks of Forest Hill; son, Kenny Donley and wife Denise of Surfside Beach, SC; granddaughter, Cassidy "Boo Boo" Donley of Aiken, SC; son, Steven Burks of Princeton; two daughters, Debbie Cromer and Tina Billings of Princeton; eleven grandchildren and 8 great grandchildren; two sisters, Dicey Sizemore of Bluewell and Lorraine Green of Portsmouth, VA; one half-brother, Dwight Bailey of Moncove Lake; two half-sisters, Lucy Bowman of Falls Mills, VA and Bonnie Bailey of Rock and his close friends, C.B. Shrader, George Harmon, Doug Tilley and John Milam.
Graveside service and burial will be held 1:00 pm Wednesday November 23, 2016 at the Roles Chapel Baptist Church Cemetery with Pastor Robbie Merritt officiating. Friends are asked to meet at the cemetery at 12:30 pm on Wednesday. There will be no visitation.
Family and friends will serve as pallbearers.
In lieu of flowers the family requests that donations of sympathy be made to Hospice of Southern WV and the Veterans Administration.


To send flowers to the family in memory of Charles Burks, please visit our flower store.