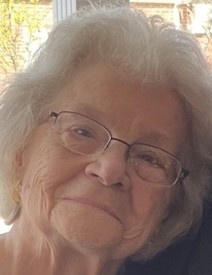 Ceceilia Marie Burgess Curry, 84, of Lerona formerly of Blair, WV went home to be with the Lord Tuesday, March 29, 2022 at her home surrounded by her loving family.

Born January 24, 1938 at Slagle, WV she was a daughter of the late Rexford and Bessie Johnson Burgess.

Ceceilia was a school cook at Sharples High School with over 20 years of service.  She had a love for God, her family, cooking, flowers, painting and crocheting rugs.

Funeral services will be 3:00 P.M. Friday, April 1, 2022 at the Ronald Meadows Funeral Parlors Chapel with Patricia Mick officiating. Burial will follow in the Meadows Family Cemetery at Longbottom. Friends may call from 1:00 P.M. – 3:00 P.M. on Friday at the funeral parlors.

Ceceilia loved flowers, in lieu of donations or tree planting, please send or plant a flower in her memory.

To send flowers to the family in memory of Ceceilia Curry, please visit our flower store.