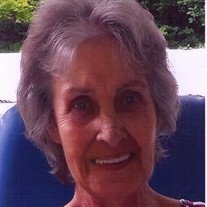 Carol Sue Bragg Slatton of Barger Springs, WV went to be with the Lord on March 7, 2016 at the Summers County Rehabilitation and Nursing Center.
She was born June 10, 1941 in Glen Rogers, WV to the late Lloyd Edward Bragg and Rita Irene Elkins Bragg.
Carol was a good and kind Christian woman of the Baptist faith. She quietly touched many hearts in her 74 years. Fishing and camping with her family were her favorite activities. She was always the one who caught "the big one." As soon as she could get outside with her coat on, she enjoyed sitting on her porch to feed the birds and squirrels. As warm weather approaches, she will be deeply missed by her family and friends.
Other than her parents, she was preceded in death by her husband of 54 years, Clarence Evans Slatton Jr.; two brothers, Eddie Bragg and Danny Bragg and one sister, Patsy Sexton.
Those left to cherish her memory include her two sons, Clarence "Tim" Slatton and wife Ann of Forest Hill and Ricky Lee Slatton and friend Kathy of Barger Springs; one daughter, Clara Mitchell and friend David of Hilldale; six grandsons, Anthony Slatton and wife Laura and sons, Logan and Mason of Rock, Brandon Mitchell and wife Carrie and sons, Cannon, Gage and Gunner of Ballengee, Ricky Ray Slatton and son, Nathan of Monroe County, Bradley Mitchell and fiancée Whitney and his son Remington of Gallatin, TN, Steven Slatton and wife Sarah and son, Waylon of Princeton and Jessy Slatton and wife Alisha and two daughters, Haley and Hannah of El Paso, TX; one granddaughter, Yvonne Slatton of Summers County and her two sons, Jeffery and Joseph; four brothers, Acy Bragg and wife Linda of Vinton, OH, Freddie Bragg and wife Sherry of Oceana, Dennis "Dickie" Bragg and wife Tammy of Oceana and Jimmy Bragg and wife Kara of Kopperston; two sisters, Judy Lowe and husband, Ray of Clemmons, NC and Barb Crouse and husband Tommy of Kopperston and several nieces and nephews.
The family would like to give a special thanks to the staff at the Summers County Rehabilitation and Nursing Center, as well as the Hospice staff, for their loving care during her final days on earth.
Memorial services will be held 1:00 P.M. Thursday, March 24, 2016 at the Barger Springs Cemetery with Pastor Robbie Merritt officiating. Friends and neighbors may call on the family at Carol's home an hour prior to services.
To send flowers to the family in memory of Carol Slatton, please visit our flower store.