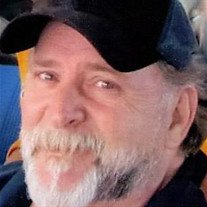 Bobby Owens Crowe, 61, of Riverside Rest went home to be with the Lord Saturday, October 29, 2016 at his home following a short illness.
Born Ocotber 23, 1955 at Union he was a son of the late William Owens and Carolyn June Carr Crowe.
Bobby was of the Baptist Faith and served his community in transportation services at the Summers County Council on Aging for the past 30 years. He enjoyed joking, model planes, video games, camping, the outdoors and spending time with his family and friends.
Preceding him in death include; one daughter, Donna Joe Crowe; one grandson, Joseph "Bubba" Adkins; one brother, Tommy Crowe and one sister, Mary Ann Crowe.
Those left to cherish his memory include his wife of 37 years, Betty Jo Crowe at home; two daughters, Kimberly Ann Adkins and husband Frankie of Talcott and Misty Dawn Vandall and husband Ricky of Pipestem; five grandchildren, Gabriel, Ethan and Nicky Vandall and Hannah and Brayden Adkins; one brother, Melvin Crowe and wife Debbie; four sisters, Helen Gill and husband Lloyd, Cherrie Gill and husband Dennis, Robin Crowe and Janet Richardson and husband Stephen; numerous nieces and nephews; also surviving is his work family at Summers County Council on Aging, his beloved pets, Dr. Waheed Khan and Staff, and Hospice of Southern West Virginia.
Funeral services will be 11:00 A.M. Wednesday November 2, 2016 at the Ronald Meadows Funeral Parlors Chapel with Pastor Anthony Carter and Bob Carr officiating. Burial will follow in the Upland Cemetery near Hinton. Friends may call from 6-8 P.M. Tuesday at the funeral parlors. Family and friends will serve as pallbearers.

To send flowers to the family in memory of Bobby Crowe, please visit our flower store.