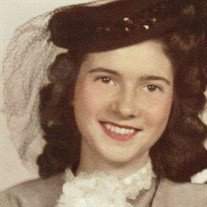 Barbara Ellen Bond Hogan McNeil, was born January 26, 1928, in Hinton, West
Virginia. She passed away of natural causes, after a long illness, in Phoenix, Arizona
June 7, 2015. Barbara was the first born child of Robert Kenneth and Flossie Mae
Williams Bond. She was an excellent homemaker, the most wonderful cook of fabulous
meals. Mom was the original recipe item extender and substituter of anything she was
short of or did not have for her recipes. Mom's repertoire of recipes existed as a second
nature learned from early childhood by her step mother, Wilma Shumate Hogan Bond.
Our family moved to Phoenix, Arizona in 1957 and Mom's oven made her the Pied Piper
of the neighborhood, because she was the only "cook" around. Most other children's
mothers worked outside the home or just did not bake and did little cooking. There was
always competition beyond sibling rivalry for the bounty prepared. Mom would make
cold bread pudding of the unused breads of the week. This changed in Arizona because
the neighbor children just walked in and devastated the bread box of anything in it,
particularly the old hard biscuits. She was often called "Mamacita" and enjoyed by our
Mexican friends. Mom loved hummingbirds, butterflies and cardinals; she collected
light houses and Precious Moments figurines. Mom's passion was chocolate, known to
her as a true health food. Unfortunately, to her chagrin, she passed that trait to all of her
children. Regarding chocolate, stealth and secrecy became as important in her household
as in the CIA. Mom's soul and natural spirit was of loving kindness to everyone; hers
was a childhood innocence pervading her life. Her sharing and caring attributes earned
her angels wings well before her passing. A few years ago, after she had essentially
became imprisoned within her body but still able to talk with difficulty. Gary, her eldest
son, was talking with her. He asked, "Mom, do you remember when you were going to
church? Yes" was her reply. "Did you ask God to save your soul?" Her reply was "yes I
did" Gary said to her "Mom, that is the most beautiful thing I've ever heard you say" to
which she kissed him. Barbara, "Mom" was preceded in death by her parents, R.
Kenneth and Flossie Mae Bond, step mother Wilma Ann Bond, an infant brother Russell
Bond, sisters Margie Frances Hogan and Mary Bennett, brother James Bond, husbands
Donald Lee Hogan and James McNeil. Barbara is survived by a brother Robert Bond of
Chicago, Illinois; her thirteen children and their spouses. Gary (Margaret) Hogan, Darla (Huston) Eads, Kenneth Hogan, Donald (Karen) Hogan, Wayne (Michelle) Hogan, Robert (Peggy) Hogan, Terry Young, Timothy (Linda), Mark (Karen) Hogan, Jami Meyers, Michael McNeil, Barbara (Tim) Malchonoff, and Kevin (Lisa) McNeil. Barbara leaves a legacy of 51 grandchildren, 68 great grandchildren and five great great grandchildren: all of which know her as "Mom".
Funeral services will be by the Pastor Roger Persinger at the Ronald Meadows Funeral Parlors of Hinton, WV on Thursday, June 18, 2015. Visitation will be from 12 o'clock until 1 PM with Barbara's funeral service following at 1 PM. Burial will follow at the Restwood Memorial Gardens, Madams Creek, Hinton, WV. Pallbearers will be sons and grandsons.
Arrangements are by the Ronald Meadows Funeral Parlors of Hinton, WV
Condolences may be sent to the family at www.ronaldmeadowsfp.com

To send flowers to the family in memory of Barbara McNeil, please visit our flower store.