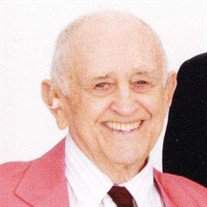 Ashby Marshall Rhodes, 94, made his last voyage when he passed away peacefully at Westminster Palms in St.Petersburg, FL, on February 15, 2018.
Born July 5, 1923 in Hinton, WV to the late William Daniel Rhodes and Katherine Pyles Rhodes Macdonald, he grew up in Pence Springs, graduated from Pence Springs High School and served in the South Pacific with the Navy during World War II. He received a BS from West Virginia University and a PhD from Michigan State University. During his career on the faculty of the University of Illinois he taught seminars, conducted a genetic lab and discovered the sugary enhancer gene, now widely used in sweet corn today.
Ashby retired to Florida in 1982 and became a world traveler, making many friends on cruises, particularly those focused on solar eclipse. He established an endowed scholarship fund at West Virginia University Foundation and helped many students with college expenses.
He is preceded in death by his brother, William Dale Rhodes and his nephew, Stephen Ashby Ripberger.
Ashby is survived by his sister, Virginia Rhodes Ripberger, and nephews, Carl Theodore Ripberger, III, and William Rhodes Ripberger. He will be lovingly remembered by his five grand nieces and nephews and seven great nieces and nephews.
Graveside services will be 11:00 A.M. Monday, February 26, 2018. Burial will follow in the Greenbrier Burial Park.
To send flowers to the family in memory of Ashby Rhodes, please visit our flower store.